My cousin and her husband came over for breakfast, and thank goodness they are open to eating Paleo.  Karla ran to the market to get some breakfast supplies early in the morning.  We decided on turkey sausage, scrambled eggs, and hash browns…Not your ordinary hash browns though.  We made sweet potato hash browns.  Common misconception that root vegetables are forbidden on the Paleo diet.  In moderation they are both delicious and great for you.  They are pretty heavy on carbs and as such, if you are really trying this diet to lose weight, then you might want to stay away.

I will say that they came out wonderfully.  We broke out the food processor and grated the sweet potatoes down.  Then we soaked them in water for 30 minutes.  Seems like a strange step, but this will ensure that your has browns come out nice and crispy.  Cook them up as you would regular browns, but try coconut oil in the pan. 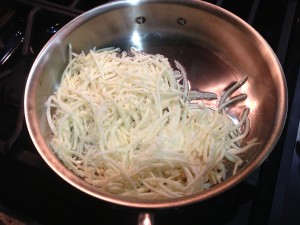